Decades after Myanmar's (formerly Burma) military junta forced the Rohingyas into exile, their suffering still continues. Trapped in displacement camps, they survive on starvation rations in constant fear of abuse. "My people are rotting," despairs one refugee. The Bangladesh government classes the Rohingyas as illegal immigrants. According to the UNHCR, guards at the displacement camp are accused of forcing refugees into prostitution, extortion and stealing food. Thousands more live in slums along the Naj river without the basic protection of the U.N. "We survive by collecting leaves and boiling them," says one woman. "No-one cares about us." 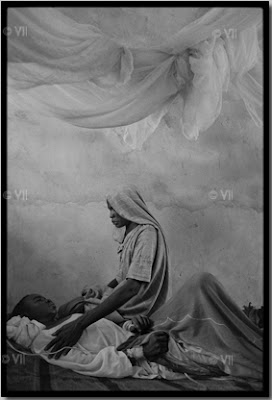 Darfur, 2004 - An internally displaced woman cared for her son, sick with hepatitis E at the city hospital in Mornei, West Darfur, which was refurbished and run by MSF France.
@ Picture by James Nachtwey


Photo Essay on Poverty by James Nachtwey, pls click:
Start Slide Show@www.viiphoto.com
Posted by madsolitaire at 8:47 AM No comments:


Flwg from BBC: Nurses on the Front Line:


The Karen people of Eastern Burma have endured a 60 year old conflict with the country’s military government. The European Parliament has condemned the Burmese government’s activities as ‘ethnic cleansing’. But the conflict in the mountains of Eastern Burma the size of Switzerland between the army and the Karen Resistance has gone largely unreported by the world’s media. Under cover of dense jungle and airtight press restrictions, the military government has driven an estimated 150,000 thousand of Karen and their ethnic cousins the Karenni into neighbouring Thailand. Those unwilling or unable to leave are ‘internally displaced’ – scattered through the forest, tormented by landmines and malaria.

But the Karen have not been wholly abandoned. A band of medics and aid workers– the Free Burma Rangers – deliver basic health care to Karen and Karenni civilians. Many of the Rangers are Karen themselves, trained by outfits such as Medcins sans Frontieres and American medical experts. All are volunteers, seeking a way to help their embattled people. Some have been inspirted to lend their support by bitter personal experience. An example is 34-year-old Paw Htoo – one of the nurses featured in the first programme. Thai-trained Htoo told us she joined the Rangers when government soldiers murdered her husband. But the FBR – funded by churches and private individuals – also includes foreign volunteers from the US and elsewhere.

Over four years our ….On the Front Line filmmakers went on four mercy missions with the Free Burma Rangers. In the two films we see the nurses delivering medical aid in the heart of the war zone. Theirs is not a military operation. Their purpose is simply to deliver medical care and humanitarian aid to beleaguered Karen communities. But with the forest riddled with mines and Burmese soldiers, they are every bit as dangerous as any armed incursion and secrecy on locations and even of the precise composition of the FBR missions was a condition of the filming. Such is the concern, even our crew cannot be identified in the programmes or the credits.

In the first film, going back to the very first filming mission, the Rangers establish a makeshift treatment centre deep in hostile territory. They do not lack for patients – typhoid, diarrhoea, dengue fever and malaria are rife in the region. Then they get an emergency call – a young man has stepped on a mine. The Rangers amputate, but are unable to prevent infection from setting in. The victim is distraught, knowing that for the rest of his life he’ll be a burden instead of a help to his family. “When it happened I asked the others to shoot me,” he said. “Now no one can do anything for me. From now on I won’t be able to do anything”.

The second programme follows Maw Naw, a recent recruit to the Free Burma Rangers. He finds more evidence of the army’s campaign to demoralise the Karen and depopulate their mountain homelands: a burned-out village. The Rangers can’t be everywhere at once. In their absence the villagers must be their own doctors. Maw Naw meets a man who claims to performed amputations on seven land mine victims – without anaesthetic and using a small pocket-knife. Incredibly, he says all his patients survived.

In another part of the forest, Maw Naw and the filmmakers witness the evacuation of a village. A Burmese Army patrol is spotted and the villagers flee their huts for the forest. The exodus is eerily calm – this is nothing new for the Karen. Indeed they say this is the third time in a year that they have had to leave their homes. Other refugees tell harrowing tales of forced labour, nocturnal attacks and rape.

The film ends with Mwa Naw and the crew witnessing a brief gunfight between Burma Army and Karen guerrillas. This time, all of the Karen fighters return. But their numbers are rapidly dwindling – as is Karen resistance as a whole. The Free Burma Rangers are doing their best – they estimate they have treated some 300,000 people and delivered humanitarian aid to twice that number. But many believe that without further outside assistance the Karen will follow several of Burma’s other minority groups into oblivion. 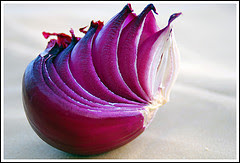 Memory likes to play hide-and-seek, to crawl away. It tends to hold forth, to dress up, often needlessly. Memory contradicts itself; pedant that it is, it will have its way.

When pestered with questions, memory is like an onion that wishes to be peeled so we can read what is laid bare letter by letter. It is seldom unambiguous and often in mirror-writing or otherwise disguised.

Beneath its dry and crackly outer skin we find another, more moist layer, that once detached, reveals a third, beneath which a fourth and fifth wait whispering. And each skin sweats words too long muffled, and curlicue signs, as if a mystery-monger from an early age, while the onion was still germinating, had decided to encode himself.

Then ambition raises its head: this scrawl must be deciphered, that code cracked. What currently insists on truth is disproved, because Lie or her younger sister, Deception, often hands over only the most acceptable part of a memory, the part that sounds plausible on paper, and vaunts details to be as precise as a photograph: The tarpaper roof of the shed behind our building shimmered in the July heat and in the still air smelled of malt lozenges ...

The onion has many skins. A multitude of skins. Peeled, it renews itself; chopped, it brings tears; only during peeling does it speak the truth. What happened before and after the end of my childhood knocks at the door with facts and went worse than wished for and demands to be told now this way, now that, and leads to tall tales.


Peeling the Onion by Gunter Grass


Picture by dineanddish @ Flickr.com
Posted by madsolitaire at 11:06 AM No comments: 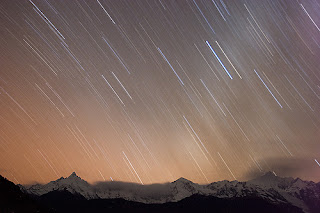 Picture by rovinglight@flickr.com
Posted by madsolitaire at 8:09 PM No comments:

Trailer from the film "War Photographer"

Nachtwey has been a contract photographer with Time since 1984. However, when certain stories he wanted to cover -- such as Romanian orphanages and famine in Somalia -- garnered no interest from magazines, he self-financed trips there. He is known for getting up close to his subjects, or as he says, "in the same intimate space that the subjects inhabit," and he passes that sense of closeness on to the viewer.

In putting himself in the middle of conflict, his intention is to record the truth, to document the struggles of humanity, and with this, to wake people up and stir them to action.


Listen to a powerful talk by James Nachtwey as he shares with the world about his decades as a war photographyer.
Click: James Nachtwey @ www.ted.com

""I have been a witness, and these pictures are

my testimony. The events I have recorded should

not be forgotten and must not be repeated."

-James Nachtwey-
Posted by madsolitaire at 2:34 PM No comments: