a tree with no name

There is a tree by the river and we have been watching it day after day for several weeks when the sun is about to rise. As the sun slowly rises over the horizon, over the trees, this particular tree becomes all of a sudden golden. All the leaves are bright with life, and as you watch it as the hours pass by, that tree whose name does not matter - what matters is that beautiful tree - an extraordinary quality seems to spread all over the land, over the river. And as the sun rises a little higher the leaves begin to flutter, to dance. And each hour seems to give to that tree a different quality. Before the sun rises it has a sombre feeling, quiet, far away, full of dignity. And as the day begins, the leaves with the light on them dance and give it that peculiar feeling that one has of great beauty. By midday, its shadow has deepened and you can sit there protected from the sun, never feeling lonely, with the tree as your companion. As you sit there, there is a relationship of deep abiding security and a freedom that only trees can know.


Krishnamurti to himself - His Last Journal

For free e-books on Krishnamurti, click
here
Posted by madsolitaire at 1:26 PM No comments: 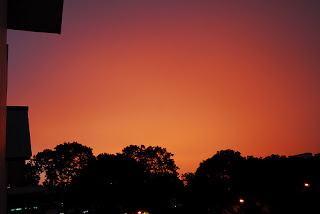 Forms, sounds, odours, tastes,
Tactiles and all objects of mind -
Desirable, lovely, agreeable,
So long as it's said: "They are."

There are considered happiness
By the world with its devas;
But where they cease,
That they consider suffering.

The noble ones have seen as happiness
The ceasing of identity.
This [view] of those who clearly see
Runs counter to the entire world.

Behold this Dhamma hard to comprehend:
Here the foolish are bewildered.
For those with blocked minds it is obscure.
Sheer darkness for those who do not see.

But for the good it is disclosed,
It is light here for those who see.
The dullards unskilled in the Dhamma
Don't understand it in its presence.

This Dhamma isn't easily understood
By those afflicted with lust for existence,
Who flow along in the stream of existence,
Deeply mired in Mara's realm.

Who else apart from the noble ones
Are able to understand this state?
When they have rightly known that state,
The taintless ones are fully quenched.


Picture: All Rights Reserved ® aml.2009
Posted by madsolitaire at 9:00 PM No comments: