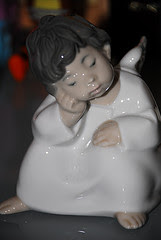 "I have found the paradox
that if I love until it hurts,
then there is no hurt,
but only more - Love."

Every one will admit that all the evils in the world are produced by selfish desire. But how this desire or 'thirst' can produce re-existence and re-becoming is a problem not so easy to grasp.

There are four nutriments in the sense of 'cause' or 'condition' necessary for the existence and continuity of beings: ordinary material food, contact of our sense organs (including mind) with the external world, consciousness and volition or will.


What the Buddha Taught, Venerable Dr Walpola Rahula
Posted by madsolitaire at 4:53 PM No comments:

The Buddha describes the Dhamma as "subtle, deep and difficult to see," and one of the things that make it difficult to see is its thesis that the highest happiness cannot be won by yielding to the longings of the heart but only by subduing them. This thesis runs utterly counter to the thought, attitudes and actions of people fully immersed in the world. As long as we are infatuated with the seductive lures of sensual enjoyment, as long as we take delight in being this or becoming that, we will regard the sublime Dhamma as a mystery and a puzzle.

The Buddha therefore realized that the first major challenge that he would face in establishing his world-transcending Dhamma was to break the grip that sensual pleasure and worldly attachment have upon the mind. He had to knock the mind out of its accustomed ruts and set it moving in an altogether different direction.

We have to learn to see beneath the glitter of pleasure, position and power that usually enthralls us, and at the same time, to learn to see through the deceptive distortions of perception, thought and views that habitually cloak our vision. Ordinarily, we represent things to ourselves through the refractory prism of our subjective biases.

In the Buddha's Words, Bhikkhu Bodhi


Picture from BuddhistChannel
Posted by madsolitaire at 3:54 PM No comments: 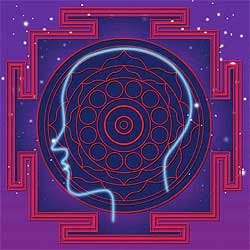 The Pali verb "conceives" (mannati), form the root 'man', "to think", is often used in the Pali suttas to mean distortional thinking - thought that ascribes to its object characteristics and a significance derived not from the object itself, but from one's own subjective imaginings. The cognitive distortion introduced by conceiving consists, in brief, the intrusion of the egocentric perspective into the experience already slightly distorted by spontaneous perception. The activity of conceiving is governed by three defilements, which account for the different ways it comes to manifestation - craving (tanha), conceit (mana) and views (ditthi).

From Notes to Majjhima Nikaya by Bhikkhu Nanamoli and Bhikkhu Bodhi


Picture from BuddhistChannel
Posted by madsolitaire at 3:03 PM No comments: 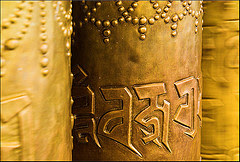 The wise one has given up her old delusions,
and creates no new ones,
isn't trapped by her desires
or stuck in rigid opinion.
She is free of theories,
unsullied by the world.
She is wise.

When Patanjali uses the word 'yoga', he means 'yoking'. The practice of yoga is meant to rein in the tendency of consciousness to gravitate towards external things, to identify with them and try to locate happiness in them. Steady practice at "yoking'' teaches consciousness how to turn inward toward itself and realize the true nature of its underlying awareness.

In order to still the movements of consciousness to the point of realization - seeing reality as it is - we must allow each aspect of ourselves to clarify. We are encouraged to bring clarity to our relationships with the beings and objects of the external world, so that those relationships might cease to generate suffering or impede realization. Likewise, we are assured that a disciplined inner life is the most direct path to happiness.

In Patanjali's view, the commotion of our physical and mental life conceals the fact that our thoughts and actions are almost always tinged with wanting, aversion, egoism or fear of extinction. The challenge lies in overcoming the well-established mental and physical habits that already produce suffering in our lives.


The Yoga-Sutra of Patanjali

A new translation with commentary by Chip Hartranft
Posted by madsolitaire at 4:53 PM No comments:

truths of the heart 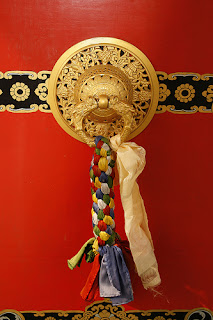 Samvega was what the young Prince Siddhartha felt on his first exposure to aging, illness, and death. It's a hard word to translate because it covers such a complex range — at least three clusters of feelings at once: the oppressive sense of shock, dismay, and alienation that come with realizing the futility and meaninglessness of life as it's normally lived; a chastening sense of our own complacency and foolishness in having let ourselves live so blindly; and an anxious sense of urgency in trying to find a way out of the meaningless cycle. This is a cluster of feelings we've all experienced at one time or another in the process of growing up..

The first step in that solution is symbolized in the Siddhartha story by the prince's reaction to the fourth person he saw on his travels outside of the palace: the wandering forest contemplative. The emotion he felt at this point is termed pasada, another complex set of feelings usually translated as "clarity and serene confidence." It's what keeps samvega from turning into despair. In the prince's case, he gained a clear sense of his predicament and of the way out of it, leading to something beyond aging, illness, and death, at the same time feeling confident that the way would work.

As the early Buddhist teachings freely admit, the predicament is that the cycle of birth, aging, and death is meaningless. They don't try to deny this fact and so don't ask us to be dishonest with ourselves or to close our eyes to reality. As one teacher has put it, the Buddhist recognition of the reality of suffering — so important that suffering is honored as the first noble truth — is a gift, in that it confirms our most sensitive and direct experience of things, an experience that many other traditions try to deny.

From there, the early teachings ask us to become even more sensitive, to the point where we see that the true cause of suffering is not out there — in society or some outside being — but in here, in the craving present in each individual mind. They then confirm that there is an end to suffering, a release from the cycle. And they show the way to that release, through developing noble qualities already latent in the mind to the point where they cast craving aside and open onto Deathlessness. Thus the predicament has a practical solution, a solution within the powers of every human being.


To read full essay "Affirming the truths of the heart", Click Here


Picture from kalsang35@Flickr.com
Posted by madsolitaire at 2:50 PM No comments: 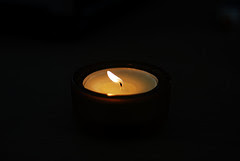 "If the doors of perception were cleansed,
every thing would appear to man as it is,
- infinite."

A story of a boy who was a fighter pilot whose plane was shot down by the Japanese.

To read article from the What Is Enlightenment magazine on the same subject, click here:
Death, Rebirth, and Everything in Between -
A scientific and philosophical exploration by Carter Phipps