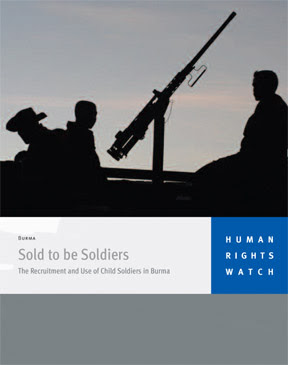 Human Rights Watch (HRW) says children as young as 10 are beaten or threatened with arrest to make them enlist.

The report, entitled "Sold to be Soldiers: The Recruitment and Use of Child Soldiers in Burma" says there are thousands of children in the Burmese military.

It claims that children are approached in public places by military recruiters and civilian brokers who have been promised cash rewards by the military.

The children are often beaten or threatened with arrest to force them to enlist, the report says.

For full report from Human Rights Watch, Click Here
Posted by madsolitaire at 9:37 PM No comments: 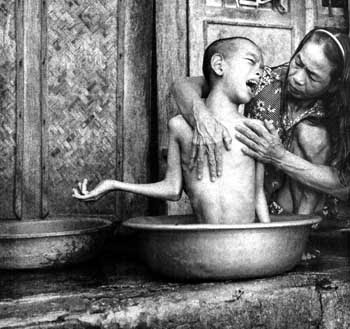 My daughter taught me this today:

"I forgot why I was born
or what's my purpose in life.

Then I look at all the suffering around me
- and I remember."


Photo by James Nachtwey
Posted by madsolitaire at 7:52 PM 1 comment:

Posted by madsolitaire at 7:48 PM No comments: 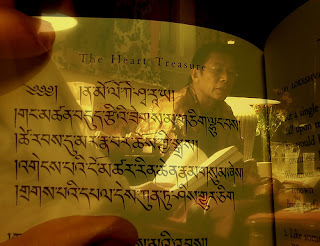 In the Kalacakratantra, gnosis (jnana), which is considered the ultimate reality, is the most crucial concept.

In this regard, the Kalacakratantra fully accords with the writings of other gnostic systems, which also sees gnosis as the source of sublime power, the ground of all being, and the potential for liberation or destruction, existing in a latent state within the psyche of all people.

The Christian gnostic text the Testimony of Truth asserts that the gnostic is a disciple of his own mind, "the father of the truth". Therefore, gnosis is nothing other than self-knowledge, insight into the depths of one's own being. As for all other gnostic traditions, so too for the Kalacakratantra tradition, the individual who lacks this knowledge is driven by impulses that he does not comprehend. One suffers due to ignorance regarding one's own divine nature. Therefore, ignorance of oneself is a form of self-destruction.

In other words, in these gnostic traditions, one becomes the transcendent reality that one perceives at the time of spiritual transformation. Having perceived oneself in this way, one perceives and knows all things in the same way. Likewise, just as in the Kalacakratantra, so too in some Christian gnostic systems, the realization of gnosis entails the transcendence of all differentiations, or dualities, for it is the final integration of the knower and the known. One reads in the Gospel of Thomas:


The Kalacakratantra speaks of this non-dual perception of the world in terms of seeing all things as being of the "same taste" - the taste of gnosis.

The Inner Kalacakratantra by Vesna A. Wallace

Photo Credit: Picture @ Flickr
Posted by madsolitaire at 9:37 AM No comments:

"I am deeply touched that this great honor has been given to me, a Buddhist monk born of a simple family."


For full story at CNN

In an interview with VOA, the Tibetan spiritual leader said his successor could be chosen like the Pope, or he may decide to declare his own successor while he is still alive.
Read more...

Teachings of HH The Dalai Lama
Posted by madsolitaire at 9:53 AM No comments: 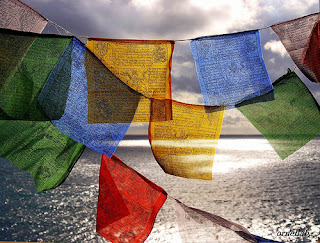 There is a term in Tibetan, nge jung, that is often translated as "renunciation", but which literally means "definite emergence". Definite emergence is the capacity to wake up and be willing to face our life and our habitual tendencies. It is the intention, either consciously chosen or instinctually driven, to become conscious. This movement towards consciousness has at its heart the recognition that the resolution of the struggles and suffering of our life is to face them. While we may be tempted to hide our fallibility and problems, and deny or anesthetize our emotional struggles, they are resolved only when we genuinely address them honestly and openly. Anything else simple perpetuates a regressive sleep of ignorance. We may put a bandage over our pain and wounds, hoping they will go away, but at some point we will need to bring fresh air to them. In our lives, it would seem that almost anything may be used as a means to avoid facing ourselves and anesthetizing our awareness. We may take refuge in our material desires, our sensory stimulation and entertainment, our work, relationships, and various intoxicating substances, including food.

The meaning of this renunciation is not giving up life. It is living fully, fearlessly and with openness.

Emerging from this illusion, we take a step across the threshold, facing our fear and insecurity. This requires an inner decision: the willingness to truly wake up and face ourselves, to engage in life knowing that the source of our suffering or our happiness lies in our minds. We are then confronted with the reality that we, on one level, choose the life we create. The heroic quest begins when we take up the challenge.

The Wisdom of Imperfection, Rob Preece

Picture by: ornellab. at Flickr.
Posted by madsolitaire at 4:55 PM No comments:

the higher destiny of man

To a Tibetan, religion is not so much the adherence to a certain creed or dogma, but a natural expression of faith in the higher destiny of man, that is, in his capacity to free himself from the bondage of delusion and the narrowness of egohood in order to realize the universality of his true nature in the Enlightened Mind.


Picture ® aml
Posted by madsolitaire at 8:49 PM No comments: 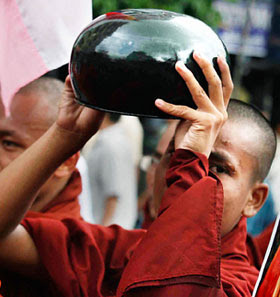 
Nothing better than patience is found.
Whoever, when strong,
is forbearing
to one who is weak:
that's the foremost patience.
There's no reproach for one who is strong,
guarding -- guarded by -- Dhamma.
You make things worse
when you flare up at someone who's angry.
Whoever doesn't flare up at someone who's angry
wins a battle hard to win.
You live for the good of both
-- your own, the other's --
when, knowing the other's provoked,
you mindfully grow calm.
When you work the cure of both
-- your own, the other's --
those who think you a fool
know nothing of Dhamma."


"Monks, when liberation of the mind by friendliness (metta) is ardently practiced, developed, unrelentingly resorted to, used as one's vehicle, made the foundation of one's life, fully established, well consolidated and perfected, then these eleven blessings may be expected. What eleven?

One sleeps happily; one wakes happily; one does not suffer bad dreams; one is dear to human beings; one is dear to non-human beings; the gods protect one; no fire or poison or weapon harms one; one's mind gets quickly concentrated; the expression of one's face is serene; one dies unperturbed; and even if one fails to attain higher states, one will at least reach the state of the Brahma world."


A Monk's Reflection - Bhikkhu Gavesako @ Buddhist Channel
Posted by madsolitaire at 8:55 AM No comments: