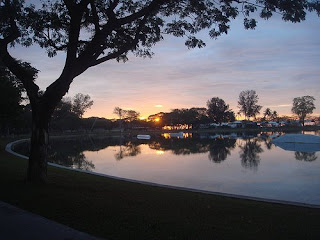 Mindfulness has, if we may personify it, a rather unassuming character. Compared with it, mental factors such as devotion, energy, imagination and intelligence are certainly more colourful personalities, making an immediate and strong impacct on people and situations. Their conquests are sometimes rapid and vast, though often insecure.

Mindfulness, on the other hand, is of an unobtrusive nature. Its virtues shine inwardly, and in ordinary life most of its merits are passed on to other mental faculties which generally receive all the credit. One must know mindfulness well and cultivate its acquaintance before one can appreciate its value and its silent penetrative influence. Mindfulness walks slowly and deliberately, and its daily task is of a rather humdrum nature. Yet where it places its feet it cannot easily be dislodged, and it acquires and bestows true mastery of the ground it covers.

Nyanaponika Thera, The Power of Mindfulness

Picture: All Rights Reserved aml.2009
Posted by madsolitaire at 7:25 PM